Posted on June 4, 2015 by thecricketcouch 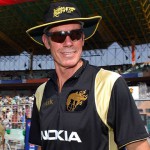 The Former head coach of Australia and Kolkata Knight Riders talks about his coaching philosophies, dealing with detractors that questioned his lack of playing experience, his ideas on leadership culture, his logic behind multiple captains while at KKR and also his desire to be a coach again, amongst other things.