On Afridi, Risk Taking and Being A Pakistan Cricket Fan

Posted on March 3, 2014 by thecricketcouch

A version of this post was first published on StarSports.com

I wouldn’t know the feeling. In fact, I don’t think I want to know it either. It is too unhealthy.

Being a Pakistani cricket fan must be the most dreadful thing and yet, the most rewarding. There doesn’t seem to be any semblance of even keel approach to their cricket. This has been the way since I remember watching cricket. When someone like Misbah ul Haq tries to incorporate a sense of balance and add consistency to the Pakistani vocabulary, he is tagged as “boring”.

Ahmer Naqvi, writing in the Cordon blog, captured the essence of what it is like to be a Pakistani cricket fan. “[W]atching Pakistan play cricket is like watching a man who wakes up every morning and is marched to the gallows. On some days, the fear of death grips him so closely that he collapses before the noose is brought out. On other days, he lives in defiance of his impending death, relishing the freedom of being alive for a few moments.”

The embodiment of everything Pakistani was in full display in the match against India during the Asia cup. A run chase of just above 5 runs per over is a done deal in modern day ODI cricket. But that would be too boring. What is a chase with out any drama?

Even as the openers Sharjeel and Shehzad stitched together a 71 run partnership at better than run a ball, and after Hafeez and Maqsood set the stage with an impressive albeit nervy 87-run 5th wicket partnership, the chase founds its way in to a position where Pakistan could lose if not for an oft-maligned, much-too-pre-disposed-to-brain-fades hero who bucks the trend, keeps his cool as others around him lose it, and plays a cameo that shall forever be remembered. Now that’s high drama. Enter Shahid Afridi.

There was a time Afridi was considered a genuine allrounder. He could bat at the top of the batting order, bowl his leg spin very effectively. In the last 5 years, however, he averages less than 17 balls faced per innings, which further reduces to less than 13 balls faced in the last two years.

Coming in to this match against India, in the previous 20 matches, Afridi had faced more than 20 deliveries just twice, once against Zimbabwe and the other time against South Africa, both innings only 23 deliveries long. Incidentally, Pakistan won both those matches.

At the post match interview, Afridi indicated that Captain Misbah has been telling him “to be patient and to take his time” and in this match, he apparently decided to heed his skipper’s advice, of course, in an Afridiesque way. He took until the 5th ball he faced to deposit it over the boundary.

After a brace of shots to boundary off Jadeja made the target manageable, there was a period of sensible cricket from Afridi when he was content to knock the ball to long on and midwicket for singles and getting close to the Indian total. For the people watching the game, this was an experience that they haven’t seen from Afridi in a long time.

As if this match was taking place in a bizarro world, Afridi kept his cool even as others around him were losing it. With only 11 required of 10 balls, Umar Gul and Mohammad Talha perished going for the glory shots, and Ajmal got bowled around his legs trying to execute a tough sweep sheet off the first ball he faced.

Nine runs needed, off 4 balls, against a confident bowler and just one wicket separating the sides. Pakistan, and Afridi, with their backs to the wall. The last two shots by Afridi embody everything about him as a cricketer, and in a way, Pakistan as a cricketing nation.

Two balls, Two sixes. Game, Set and Match. Afridi and all of Pakistan rejoice. But there was more to it than that. 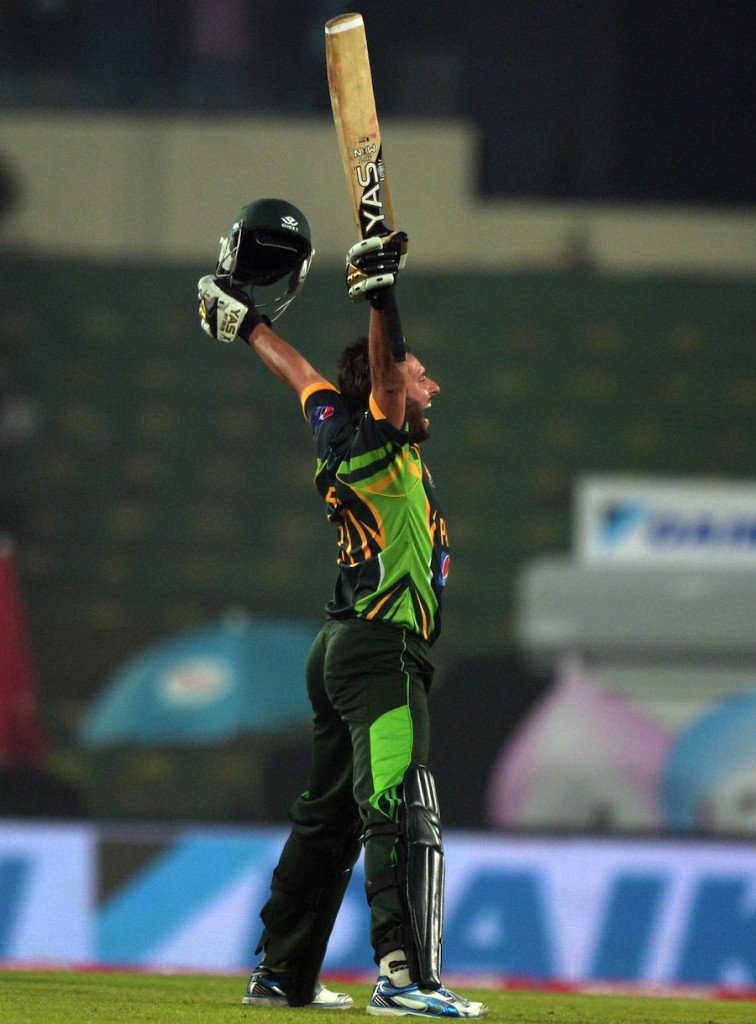 In a brilliant combination of cricketing acumen and chutzpah, Afridi moved well outside the leg stump, giving himself room to launch the delivery from Ashwin bowled from wide off the crease, around the wicket, in to orbit. Afridi must be credited for anticipating the line of attack and go inside out. It was a full-blooded swing, like a golfer trying to squeeze every last bit of yardage from his 9-iron, to land the ball on the green. The ball seemed to hang in the air for an eternity with every millisecond of its travel adding to the Pakistani fans hopes. It wasn’t a well-timed shot but it was as if the force of Afridi’s personality was willing the ball over the rope at extra cover boundary. And it made it – only just – over the outreached arms of Rohit Sharma.

At a moment that was going to decide on the fate of the match, Afridi decided to dig deep in to his past as a batsman and pulled out a shot to bail Pakistan out of desperation. Rameez Raja on air thundered, “Only Shahid Afridi can deliver such a punch!” and Sunil Gavaskar concurred, “Only he could play that shot. Only he has the nerve to play that kind of shot.”

The equation had changed, dramatically, with only three runs required off as many deliveries. It should, once again, be straight-forward. Cut down the risks, knock it around, play the percentages and go home with a win over your archrivals.

Even if he wanted to finish the match off the next delivery, keeping the ball on the ground for a four, would not only guarantee a win but also takes away the risk. After all, it was the last wicket.

But Pakistan, and Afridi, don’t do percentages.

Once again, off the very next ball, Afridi made room outside leg stump but it was a cross batted swipe. It was the Afridi of the recent years. An aging super star, with his natural talent obviously subsiding but still having the heart that he could do it. Eyes bulging, bat swung across at a rapid rate, body in no position of balance but the staunch belief that the bat would meet the ball. And it did. The ball soared over long on boundary with meters to spare.

More than the previous six, it was the last one that paints a picture of Afridi, and Pakistan. When all the common sense in the world was pointing to the fact that there wasn’t any need to go for glory shot just yet, he did, and he pulled it off. There is an unspoken acknowledgement of the fact that he was willing to die by the sword.

It wasn’t really a convincing shot. Pakistan fans have seen it many times off Afridi’s blade. An impetuous swat when it isn’t really needed. Afridi haters point to these moments to mock him while the Afridi faithful desperately hope that every one of those come off. From time to time, they do, like the 88 whirlwind runs in a losing cause at the Wanderers less than a year ago.

Ray Bradbury, the author of the much-acclaimed dystopian novel Fahrenheit 451, perfectly captures the essence of Afridi’s batting when he opined about risk taking as thus: “Living at risk is jumping off the cliff and building your wings on the way down.”

Many a time, those wings would barely be formed and only for Afridi to crash to the earth, but boy, when they are built, watch out. Afridi can soar to heights that no one can. And with him, Pakistan.

Fandom is constructed on the feeling of emotional extremes – highest of the highs and lowest of the lows – feeding in to a sense of community. Misery loves company, as do instances of exhilaration. The Pakistan fan gets to experience them both – more misery than otherwise, and keeps coming back for more because, for all the excruciating defeats, moments of magic are never too far away for their team.

I am too weak hearted for that.