Tale of Dhoni and Two Sharmas

Let me get the cliché machine cracking: A captain is only as good as his players. There is no amount of playing the hunches and strategizing that can substitute for a set of very good, skillful players. While Ricky Ponting’s record as captain of Australia ranks tops in any era of cricket, one can wonder what it would have been if not for some of the greatest players ever to play the game were in his squad. Or just look up his captaincy record in the 2008-11 period.

Joginder Sharma will forever be linked with the moment that has irrevocably changed the landscape of world cricket, bowling that slow stuff only for Misbah ul-Haq to lap it in to the hands of Sreesanth. That was the last match Joginder played for India. That’s some way to go! Since then has appeared in the IPL for Chennai Super Kings (CSK), slapped his cousin and aunt, recovered from a nasty automobile accident, and has continued to play in the Ranji Trophy for Haryana with hopes of donning the India colors again almost gone.

Ishant Sharma announced himself to the world as a 19-year old by first working over, and then ripping out Ponting during the course of a 9-over probing spell of fast bowling at the WACA in 2008. Now he is a veteran of 51 Tests and 61 ODIs without ever really making the step up to become a very good bowler. In fact, his bowling has regressed and gotten worse. Much worse.

Mahendra Singh Dhoni, with the addition of another silverware beating England in the rain-reduced Champions Trophy 2013 final to his trophy cabinet, is arguably the best captain India has had. He was the captain when India became the #1 ranked Test team, hit the winning runs to bring home the ODI World Cup in 2011 after a gap of 28 years, and coolly led India to the inaugural T20 World Cup. This is besides all his success leading CSK in the IPL and the Champions League. Many have called him a lucky captain but you make your own luck. A captain has to be willing to live with the consequences and the brickbats when the risks he takes don’t come off, so fair deal to Dhoni.

Joginder’s entire experience of bowling in the death was limited to one previous match, the semifinal vs. Australia of the 2007 WT20, when he had to limit them to 20 runs in the last over to allow India passage to the final. He gave away 6 runs and took 2 wickets. Before that over, his analysis was 2-0-31-0. In the two previous matches, his cumulative figures were 8-0-81-0. Yet, he had the ball in his hand trying to defend 12 runs in the final, which he did. Perhaps, Dhoni was moved to make the decision based on Joginder’s performance in that match so far (3-013-0) or the fact that he had no other frontline options.

With England stabilized after the initial wobble, Eoin Morgan and Ravi Bopara all set, it was going to take a miracle for India to claw back in to the Champions Trophy final. When Ishant gave away 11 runs in his 3rd over (15th over of the innings) and England comfortably placed needing only 48 off 5 overs with 6 wickets in hand, no captain in his right mind would have budgeted for Ishant to complete his spell. Especially with Umesh Yadav with his 2 overs in the tank and figures of 2-0-10-1. Well, almost no captain. Dhoni brought on Ishant for the 18th with England needing 28 off 18 deliveries and still 6 wickets in hand.  Why? What was the logic? With all the spot fixing allegations and corruption in cricket, you wouldn’t be the only one if it caused you to pause for a moment and wonder. Two legal deliveries (and 2 wides) in to that over, Ishant was nowhere near to finding the cut strip, and out of the blue, removed both set batsmen on consecutive deliveries that let Dhoni capture the world trophy he hadn’t led his team to. 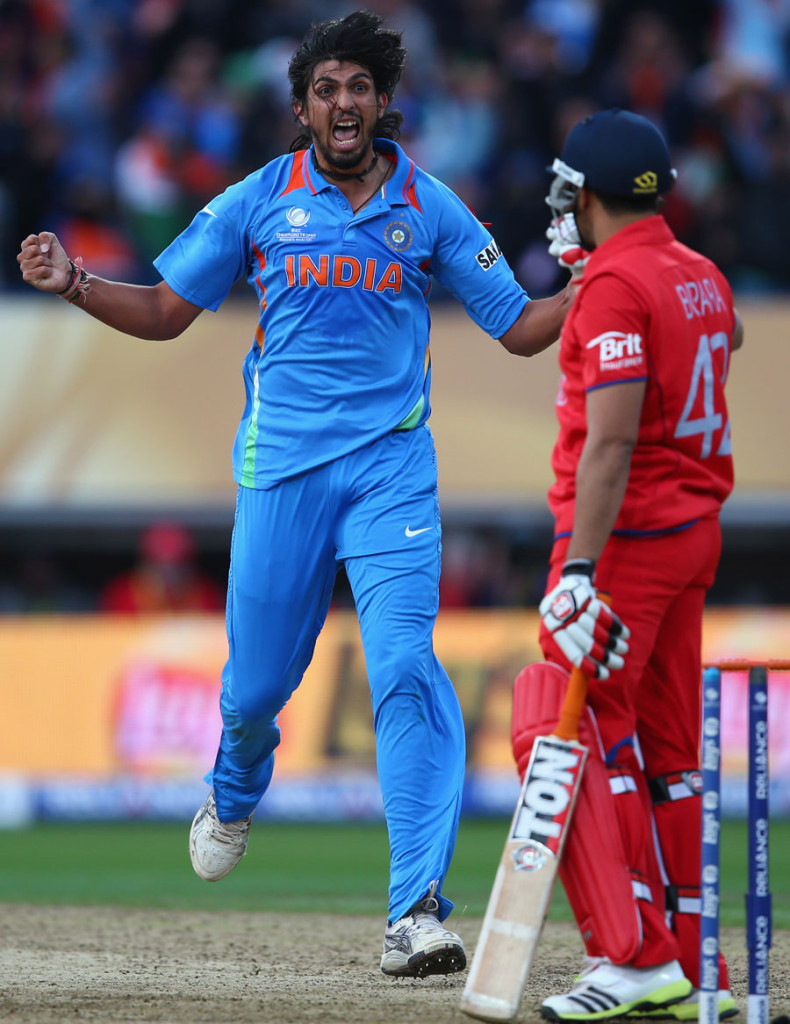 When asked after the match by Sanjay Manjrekar why he thought Dhoni gave him the 4th over instead of going to Umesh or someone else, Ishant replied that it must have been because he had “done the job” before at the end of matches. That was news to me. Kartikeya Date has dug through the stats and written this:

Ishant has now played 60 ODIs in 7 years. Of these, India (and Ishant) have defended a target in 22 games and Ishant has bowled in 21. They’ve won 13 and lost 7 of these 22 games. Six of these wins have been by a margin of less than 40 runs, including the Champions Trophy final. In only one of those games, way back in 2009, can Ishant’s efforts at the end of a match be considered to be central to India winning the close game. Ishant also bowled successfully against Pakistan earlier this year in a low scoring game… In the majority of close matches in which Ishant has played and India has defended totals, he did not finish his quota of overs. Against South Africa earlier in this champions trophy he conceded 26 in his last 2 overs after South Africa were already 8 wickets down.

If the numbers don’t really back the choice that Dhoni made, in spite of Yadav being available, then what was he trying to do but just play the hunches. With only 20 required off 16, England should have walked home blindfolded but instead became chickens with their head cut off, and promptly lost the game.

As far as I could tell, Dhoni wasn’t asked the question during the post-match presser or at the presentation ceremony. It is understandable that he would have wanted to save Jadeja and Ashwin for the powerplay overs and have the English batsmen play big shots against the turning ball. So he had to bowl a pacer (if not part-time spin) for the 18th over.  It would be interesting to know what his thought process was in giving the ball again to Ishant for the 4th time and not try Umesh Yadav.

This India team, coming in to the final match, had looked the most impressive of all the teams in the tournament, beating every opponent they faced, including the warm up games. They had the batting and bowling units for the conditions backed up by an excellent set of fielders. They probably were the odds on favorite to win the final too. However, is it just blind luck that Dhoni’s move came off? Quite possibly so. But as Gary Player said, “The harder you work, the luckier you get”.