Posted on March 7, 2013 by thecricketcouch

Since the introduction of the system of reviewing umpiring decisions initiated by player challenges, it is almost never do you see a batsman walk off the field without having second looks and short conversations with his batting partner when adjudged LBW. Of course, this is only possible in Test series where the full gamut of DRS technologies including ball track, HotSpot are available and provided the batting team still has at least one challenge remaining.

In the ongoing opening Test of the New Zealand-England series, on Day 2, England through poor execution and lack of patience shot themselves in the foot and got bowled out for 167 in the first innings. Starting with their captain Alastair Cook to the last wicket to fall (of Jimmy Anderson), it was all around poor display of Test batting, except Kevin Pietersen.

Pietersen walked in at the score of 18/2 after Cook failed to capitalize on the reprieve and failed to keep a square cut down to give Neil Wagner wicket off his 2nd ball of his first spell of the day. Watch here as the events unfold. 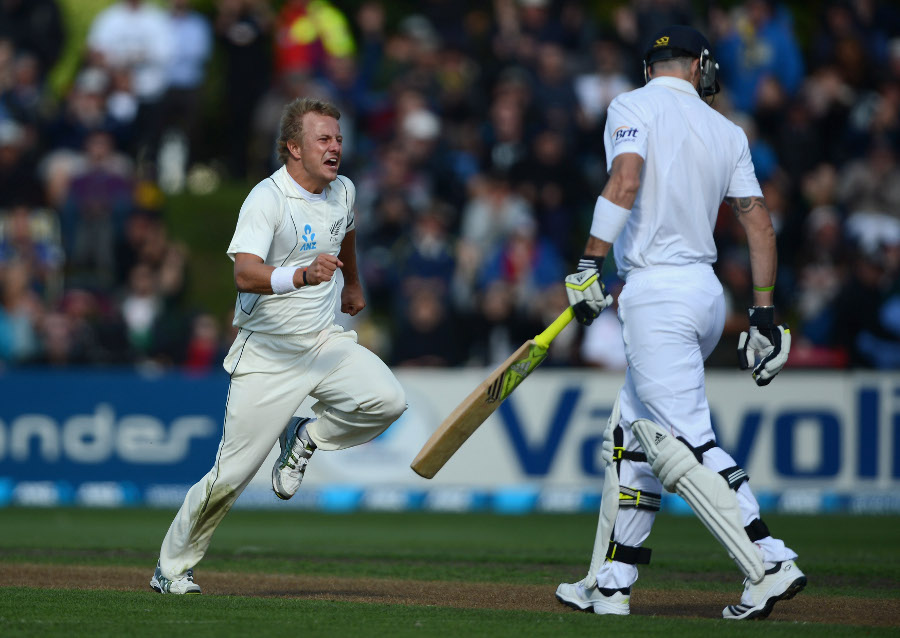 What was most interesting for me, and rather quite out of place in 2013 in a Test series where DRS is available, is how quickly Pietersen realized he was done for, and started to make his walk back. It was full delivery from Wagner, bowled from over the wicket. Pietersen facing up to his first delivery, did not have the exaggerated feet movement he usually has when he is set, but leaned forward with only a short stride, trying to cover the line of the ball bowled by a left arm seamer. He probably expected the ball to be leaving him, carrying on with the angle, and hence did the things he needed to do with that in mind. The ball pitched in line, swung just a bit late, beat the forward defense of Pietersen, to crash in to his front pad, bang in front of the stumps.

Ian Smith, on air at that time, breathlessly says, “Pietersen isn’t hanging around”.  As soon as Wagner jumped in his follow through and turned towards Umpire Asad Rauf appealing, the dreaded finger was almost on its way up, it was that plumb. A quick look behind to see where he stood, Pietersen promptly tucked the bat under and started removing his right glove, and was walking a brisk pace back to the pavilion. The best batsman in the England side got an “absolute screamer” while the rest of his mates were busy hacking themselves off.

The next batsman Ian Bell, got an almost identical delivery from Wagner first up but was saved by the combination of the ball being just that bit short allowing him to adjust to the late swing, and a slightly more pronounced forward press. Of course, as almost always he does, threw his wicket away to a soft shot after making an attractive 20-odd.

Pietersen’s instantaneous self-realization that he had been beaten all ends up and the following reaction reminded me of MS Dhoni’s dismissal in the first round match against Sri Lanka during the 2007 World Cup, in Port of Spain. Watch the clip here (time stamp 0:30).

The bowler was Muralitharan. Coming in at a precarious 112/5 with India needing to win to stay alive in the tournament, Dhoni with his back foot rooted to the crease, tried to play a nothing looking shot (it was some sort of forcing straight defensive drive), by clearing his front foot to the leg side, to a delivery from Murali bowled from around the stumps.  The ball fizzed off the surface and caught Dhoni plumb in front. Even as he was reclaiming his balance, Dhoni was making the turn towards the pavilion with only a cursory look at Umpire Aleem Dar.  Of course, India would go on to lose the match and get knocked out of the tournament.

Do you remember any such instances where the batsman didn’t wait for the decision on a LBW appeal? Post links to the videos, if available, in the comments section.