Posted on March 5, 2013 by thecricketcouch

Australia finds itself two Tests down with two to go. They aren’t anywhere close to figuring out what their best XI is, where their best batsman Michael Clarke should be playing, or the most potent combination of bowlers is. It isn’t quite different to where India found itself after the Test in Sydney in January 2012.

India hung in as much as they could in Melbourne, the opening Test of their tour Down Under, and even had the upper hand fleetingly, but ended up losing the Test. Similarly, Australia after putting up 380 at Chennai and having removed the Indian openers, and reducing India to 190 odd for 4, may have had visions of first innings lead but were rudely woken up. At Sydney, on a wicket that suited them, India got bowled out for 191 on Day 1 and the series was essentially over.  At Hyderabad, Australia returned the favor with a shoddy display of 237/9 and that was that.

A four Test series seems like a long time with plenty of time available to make “in series” adjustments as well as “in match” recalibration but this is Test cricket, the most brutal and unforgiving format of the game. You’d better be hitting on all cylinders or you are going to be ruthlessly exposed by the conditions and the opposition.

Funny thing is, essentially this Australian team (with Mike Hussey, of course) went toe to toe with the reigning No. 1 team in South Africa not too long ago.  Sure, that was in their home conditions but one would not have expected them to look so clueless in India, losing by 8 wickets in the 1st Test, and by an innings and a truckload in the 2nd Test. I guess it’s just Test cricket. 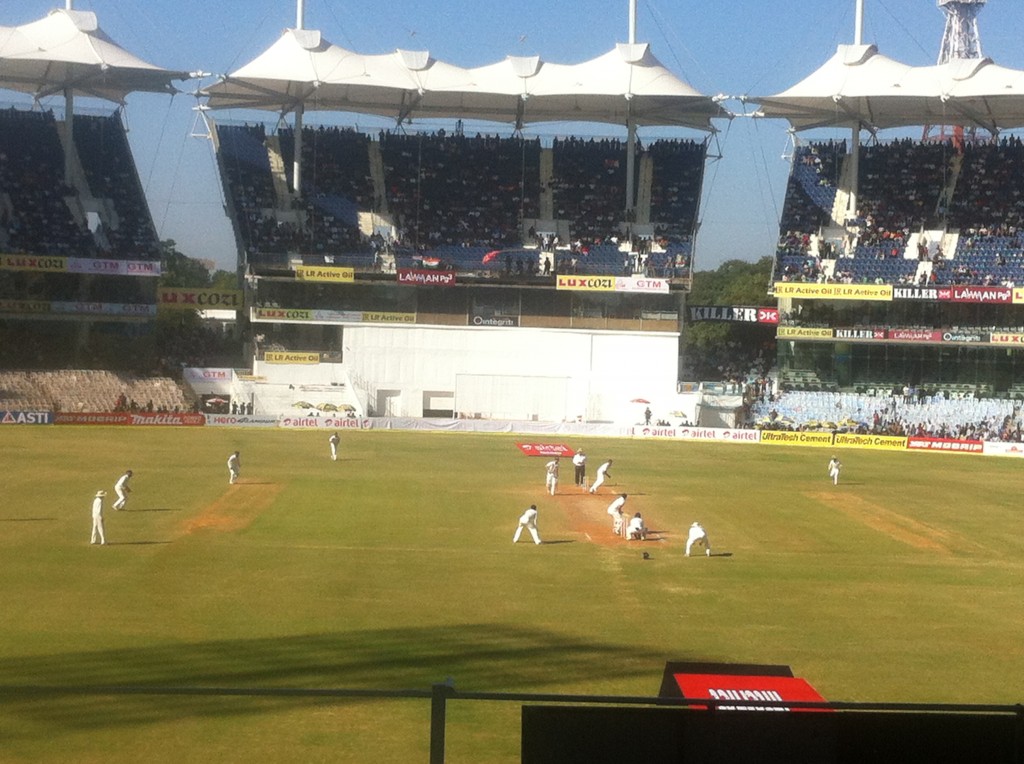 I love the movie “Shawshank Redemption” and I have seen it several hundreds of times, mainly because, Stephen King has provided so many quotable quotes that can be applied to a variety of situations. Here is one: “Geology is the study of pressure and time. That’s all it takes really… pressure and time…”

This applies to Test cricket perfectly. You absorb the pressure and play time. This was best exemplified during Day 2 of the 2nd Test. Having lost Sehwag early, Pujara and Vijay calmly – as much as they could – absorbed the best of what the Aussie bowlers offered, playing time, meandering to the Lunch total of 54/1 knowing that they could really cash in later in the day. Of course, all that could have gone kaput if the batsmen had been dismissed soon in the 2nd session and India could have struggled, but such are the fine margins in Test cricket. As Dhoni is wont to say, “You identify the key moments in the contest and make sure you win those, and the result will take care of itself.”

The beauty of Test cricket is that it provides the canvas for all sorts of artists to showcase their skills. A fiery fast bowler, a stroke less wonder, a batting genius, a twirling automaton, short and rotund, tall and languid, twinkle-toed dwarves and plodding giants, the sport accommodates all kinds but the outcome is still determined by which set of artists could hold their own, doing the basics right and for longer durations.

Of course, there could be bursts like the Devon Malcolm’s “You guys are history” spell, or England collapsing like headless chickens under a Warne spell in Adelaide, Pakistan pulling the rug from under Tendulkar in Chennai, instances where a Test between two evenly matched sides turned on its head in an instant. That too highlights the underlying nature of the sport – seemingly slow paced humdrum drawn out over several hours with severely compressed periods of breathless action.

In spite of the breaks between the Tests and the time to reevaluate your options during the series, when the levee breaks, there is no place to hide and it becomes almost inevitable that the team under the cosh like a fighter pinned against the rope with his brains bashed in, has nowhere to go but down. Some Test series from recent memories such as Ashes 2006-07, India in England 2011 and in Australia 2011-12, ones that started with tremendous promise quickly snowballed out of control for the visiting team. The mental toll that a comprehensive Test defeat can have on the players is unlike anything in sport. Five days of hard work, two weeks in a row, and at the end of it all, the realization that all your labor came to nought could be quite deflating.

This very well could be the case with Australia in India. With no way to win the series and all the processes running haywire, it is quite reasonable to think India will blank Australia 4-nil. But then, this is Test cricket. Under right conditions in Mohali and few breaks going their way, Australia could fight their way back to draw the series. Or not. Keep watching for the mundane and the magnificent. Sit back, relax and enjoy the show. It is, after all, just Test cricket.