Morale-boosting MoM Award and the Media

Posted on January 9, 2013 by thecricketcouch

A controversy has arisen with Mahendra Singh Dhoni having been awarded the Man of the Match award in the third ODI of the recently concluded India-Pakistan series. It was low score affair and there weren’t outstanding contributions from the winning side in that match that the decision to award a rather pointless award wasn’t straightforward as it generally tends to be. That is not to say that the choice of Dhoni wasn’t a fair enough one.

Saeed Ajmal bagged a five-wicket haul for Pakistan, Ravindra Jadeja did a decent job with the bat and ball, and so they could have been reasonable choices as well for the MoM award. However, Dhoni’s choice can be seen as much reasonable, if not more, when one considers that he made a vital contribution with the bat, played a hand in two dismissals and led a team – facing the real possibility of getting whitewashed at home no less in a format in which they are currently the World Champions – that defended what was a very low score. 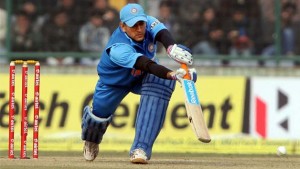 I became aware of the presence of any controversy associated with what seemed to be a fair choice when I read the news report on CricketNext.com with the headline “MOM award handed to Dhoni to boost his morale: Report”. The report cited a leading Indian English newspaper of quoting a former cricketer who was part of the MOM award adjudicators that “he was instructed to give the award to the Indian captain to boost his morale at a time when questions are being raised over his and the team’s performance in the last eighteen months”.

Since there was no link provided in this CricketNext (CN) report to the original source, I was left to guessing and searching Google for the source. I came upon the story in the Times of India (TOI) website. I compared the story as it was reported on TOI to the one on CN, and you should too.

There are several issues with both the reports but I am going to focus on the CN report in this post.

2. The CN report says “A leading Indian English newspaper on Tuesday quoted a former cricketer, who voted in favour of Dhoni, that he was instructed (emphasis added) to give the award to the Indian captain to boost his morale”. The TOI report does not actually quote any former cricketer making the claim that he was instructed to award the MoM to Dhoni. There are no names cited. There are no direct quotes in the TOI story. There are instances of “Sources said” and that is the extent of reporting in that story.

3. The TOI story also says that it was a unanimous choice. However on CN, it says “Some commentators – who did not vote in Dhoni’s favour – were completely flummoxed by the suggestion and questioned the rationale of giving the award to Dhoni when others deserved it more.”  This would make it an outright lie fabricated by CN since the meaning of unanimous when last checked is still “of one mind; in complete agreement; agreed”. Unless, in their view, “The decision so surprised some commentators — who were not involved in the decision-making” (which is what is said in the TOI report) can be turned in to saying some commentators were flummoxed without actually telling their readers that the ones flummoxed were not involved in the adjudication of the MoM award. Quite possibly, CN extended “commentators” to include on-air pundits who weren’t part of the broadcaster’s commentary team. This is unethical, in my view.

4. Other important questions to be asked is, if at all the commentators were instructed to award the MoM to Dhoni, then, by whom? Are we to assume it was from the BCCI? How was it conveyed? Was it someone at the top that decided it? If indeed so, then why not go the whole hog and send instructions to ensure Dhoni received the Man of the Series award as well? I am sure that would have been an even bigger morale boost than just a second MoM award in the series.

During the course of the last two years, there have been many instances when stories of similar nature (such as the internal dissent that the Indian team was apparently consumed in, during its tour to Australia). I have made contacts with several media personnel to gain clarity to the picture.

Most of the times the response I got were along the lines of  – There is so much that goes behind closed doors that you do not know. It is big bad world out there. It is a pretty disappointing scene out there and you are better off for not knowing it.

I accept that I may not be completely aware of all the ins and outs of what goes on but isn’t it the responsibility of the reporters and the journalists to enlighten the fans, viewers, and the readers on such matters? It is not the job of the media, as I see it, to be our security blanket that shields the fans from the disappointing ways cricket might be administered and played. Fans are emotionally invested in the teams, and hence it is of great interest to them to know exactly how the sport is being governed. There is a significant investment, beyond just emotions, fans make in terms of time and money as well.

If the media will not report on what they apparently see as a depressing scene, what exactly is their role then? By not naming and shaming the folks who might be doing underhanded deals or misgoverning etc., they are not solving the problem but in fact, aggravating it. Those who might be in charge probably get emboldened since they may realize they are not going to be dragged through the coals. Instead, what the readers get are stories loaded with innuendos, “nudge-nudge, wink-wink” that it doesn’t really add any clarity to the situation. The people reading these stories go away having reaffirmed their preconceived notions about cricket’s administrators, players and crucially, the media.

At the end of the day, Cricket is the loser in all of this.