Posted on November 29, 2012 by thecricketcouch 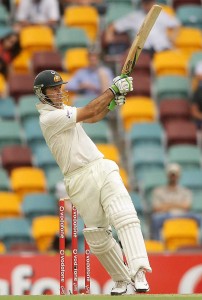 I will admit it. I didn’t watch a lot of Ricky Ponting’s career as a batsman. In what was a transformational Test match – for India at least – from 2003 in Adelaide, I can’t seem to recall many of the shots that Ponting played for his 242 runs, although I do recollect almost all of Rahul Dravid’s monumental effort in response.

It was due to combination of things. Moving away from India as Ponting was about to take off as a “great” batsman and the inability to watch live cricket on Television/Internet in the U.S. but more importantly, he was just another cog in that seemingly irrepressible Aussie juggernaut.

Watching Ponting bat was also to be witness to Australia bossing their opponents around, grinding them down mercilessly at the hands of Matthew Hayden, Justin Langer, Damien Martyn, and sucker punched by Adam Gilchrist. If you were averse to gruesome brutality, you generally stayed away from the kind of slaughtering handed down by the Aussies.

It was actually more fun to watch Australia bowl and field. Shane Warne with his made-for-TV drama and Glenn McGrath with his robotic repetitions (along with Jason Gillespie’s mullet) backed up by the catching and ground fielding that was the best in the business, by a country mile.

It was actually Ponting’s fielding that I enjoyed watching in the little time from 1995 to 1998 I could see him on TV in India– comfortable anywhere in the field right through his career: Quick reflexes, safe hands, agile, fleet footed, deadly accurate arm and thoroughly professional, as seen in he throwing himself around as Laxman and Dravid were piling on the runs in Kolkata 2001.

It took till the Ashes series of 2005 for me to really start appreciating Ponting for his batting greatness. It was as if I needed to see him bleed during the first Test at Lord’s to realize he was human and not a run-making automaton. The innings of 156 at Old Trafford, trying to temporarily put England’s plan of going ahead in the series on hold, made me sit up and take notice.

It wasn’t always easy admiring his batsmanship especially it came with its own set of not so attractive additions that were distinctively Ricky, perhaps distinctively Australian even. He was tough as nails and approached the sport as such, which did not make him immediately endearing – to me anyway.  Of course, it was my loss that I did not disentangle Ricky The Batsman sooner and enjoy him for his craft.

Recent years have seen an Australian team that suffered from mass retirements that Ponting tried to rebuild and had since given up the top job but still showing all the enthusiasm in the world for the sport and his mates.  As a fan from India, it would be easy to point to his early struggles against Harbhajan Singh or the controversial circumstances of Sydney 2008, but the more enduring images in my mind are from the Bangalore Test in 2008 and most definitely, the Quarterfinal of the World cup in 2011.

That innings in Ahmedabad was quintessentially Ricky. Under fire for not having scored an international hundred in over 13 months, with Michael Clarke ready to take over the reins, with questions about his viability as a player in Australia colors abound, Ponting made a brilliant “Eff You” 104. You can never count greatness out!

Losing Ashes at home and three in all would have sent anyone packing but Ponting still brought tremendous value to the Australian team. I had the privilege of seeing him get a renewed lease on his Test life at Melbourne and Sydney last year, keeping the doubters at bay, and scratch out a 41 under tough conditions in Trinidad to put Australia in a good position to win the Test till weather intervened.

In that typically Australian way of dealing with things upfront, he has determined that he isn’t contributing to the team as much as he would have liked and so has called it a day on a great career. For someone that always came across as a hard-nosed cricketer that refused to quit, it must have been a humbling realization but I applaud his honesty in dealing with it.

Ed Cowan provided a glimpse in to what Ponting meant to his mates and how much he cherished the team atmosphere and the pursuit of sporting excellence. “It’s been such an eye opener to see how [Ponting] goes about his cricket and how enthusiastic he is, his infectious attitude to winning, and how that can rub off not only on the Tassie (Tasmania) team, but also the Australian team. Just to be around that is pretty inspiring… I know Ricky has been always portrayed as the hard-nosed individual when he is probably the most giving, lovely and sensitive guy you could ever meet, and can be completely and brutally honest. He really cares for other people which you never would have got from not playing with him.” It shouldn’t really be surprising that he had cried when telling his teammates of his decision or of Michal Clarke tearing up at the presser.

The WACA will see him turn up for the 168th time in a Test wearing his battered baggy green, coincidentally the venue of his Test debut. Circle of life. Au revoir Ricky!