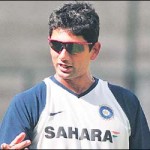 In this episode, former India cricketer and bowling coach, and the current assistant coach for the Royal Challengers Bangalore, Venkatesh Prasad, talks about his coaching stint with India, the role of coaches in cricket, the state of fast bowling in India, and also foreign coaches vis-a-vis Indian coaches. Prasad discusses at length the need for the Indian bowlers to bowl a lot more to develop bowling fitness rather than just gym fitness, and the need for players to spend time playing first class cricket before being selected for India A or the Indian team.