Bowl That Maiden Over: Part I

It is always said that, especially in test cricket, the bowling team needs to build the pressure for wickets to fall. More maiden overs are sent down, the batsmen come under the pressure and feel the need to be a little more adventurous to get the scoreboard moving. This could lead to the batsman providing opportunities for the bowlers to claim that prized wicket.

The recent past has seen the resurgence of bowlers and has brought about a semblance of balance with that breed of cricketers, that seem to have almost all the rules made for their benefit, batsmen. This could be due the increase in the number of good quality fast bowlers or decline in the batsmen’s technique, but Test cricket still remains a lot harder than it looks.

The bowlers still need to be accurate and consistent, over a spell, sessions, and days to reap their rewards. One good indicator of a bowler’s consistency is his ability to send down maidens. I have looked at the data for the last 2 years (Starting June 7, 2010 to June 7, 2012) to find out this very aspect about the bowlers of the current test arena.

In the last two years, 181 players have sent down at least one delivery in test cricket. Using the qualification of at least having bowled in 10 innings and bowled more than 100 overs in the last two years, it prunes the list to 51 bowlers. The following table lists the top 20 bowlers who bowled the highest number of maiden overs, as a percentage of all the overs they bowled in the period of interest. The top 20 features 4 bowlers each from England, Pakistan, Australia, and South Africa, 2 from India, and 1 each from West Indies and New Zealand.

(Click here for the entire list and here for the 51 that qualify). Note: It also features a few players that no longer are playing test cricket actively, such as the two M.A.’s (Amir and Asif) and Paul Harris. 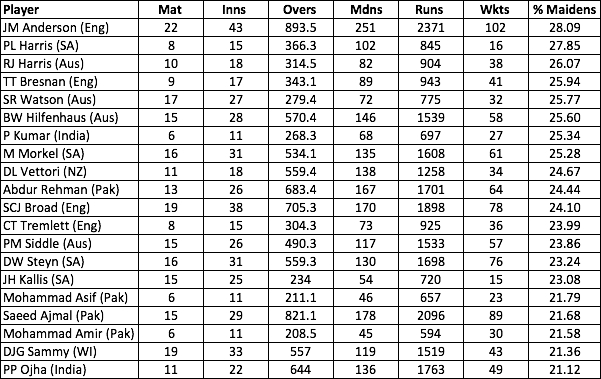 It is remarkable to see that, of the 51 bowlers who bowled at least 100 overs and in 10 innings, Jimmy Anderson who has taken the most number of wickets in the last 2 years (102 wickets at an average of 23.24 runs, striking every 52.5 deliveries) is also the bowler that has sent down the highest percentage of his overs as maidens. Anderson bowls more than 28% of his overs for maidens while the average maiden percentage for all the qualifying bowlers is just 19%.

For those pointing to Australia’s position at #3 in the rankings without a top 10 wicket taker, Peter Siddle (11), Ben Hilfenhaus (12) and Nathan Lyon (20) feature in the top 20, with percentage of maidens above average. Other Indians featuring in the top 20 on the list of wicket takers are Harbhajan Singh (14), Pragyan Ojha (16) and Zaheer Khan (17) with only Ojha having maiden percentage higher than the average (21%). It is important be cognizant of the direction of movement through the rankings that Australia and Pakistan have been making recently, and contrast it with India’s.

These numbers put in to question the role of the team management in devising bowling plans and emphasizing the importance of discipline to their wards. England and Australia have gained significantly under their bowling coaches while Indian bowlers had regressed under Eric Simons, who has now been replaced by Queenslander Joe Dawes. What was baffling as the Indian team was reeling from the body blows down under than even more than the intransigence of the team management to blood youngsters in the batting order was the team management sticking with Ashwin as their lead spinner while keeping Ojha on the bench, and not giving him a look in even at traditionally slower wickets that aid spin bowling at Sydney and Adelaide. The choice of India’s lead spinner should be a lot more obvious from the following table.

In the next installment, I will be providing information on the bowlers from the nations ranked in the top half of the ICC Test Rankings, with correlation to teams’ performances. I have also analyzed the data for bowling performances under various situations, including: Home and Away, In Wins, Losses and Draws, In Sub-continental conditions and Outside the Sub-continent, Bowling First and Second.

I will also consider the ability of a team to not only bowl maidens and be disciplined when they are in ascendancy, but while they are faced with a challenge of a big partnership. Some of the results are quite intuitive but there are some surprises too.