In pornographic films, the “money shot” is the shot. Urban dictionary defines it as “The point where a male adult film star climaxes… Believed to be the shot sequence that culminates the scene, and brings in the money.”

I have seen my share of skin flicks, in my college years and beyond. A “good” scene in one of these flicks is one that builds up a narrative, with a fair bit of foreplay, sustained action and the eventual denouement, “the money shot”. Before the age of Internet, one watched feature length movies, on borrowed VHS tapes, that had some sort of a story line tying together several action scenes. Now there is a website for anything you need. There are short clips of people doing the deed and of course, the money shot.

In fact, the early stages of the Internet, before video streaming became popular, it was overrun with lit-erotica of all kinds that fed your imagination. There was always a category that floated your own personal boat. You read a particular story, you added in your own dimensions (and weird fetishes) to it and the product played perfectly in that silly brain of yours.

My family did not have a TV for a very long time. I had to follow the cricket through newspapers and radio. The commentary and match reports were my cricket-erotica. The sounds and the words mingled to become a mushy replica of the on-field action, crystallized by the addition of my own masala to the stew. I had not seen the run up that was described as “Whispering Death” till the late 90’s but I had my own version of it playing in my head, pieced together from still photographs and dried ink on paper. I still remember quite vividly, trying to play the “Vishy square cut”, never having ever seen it, in a backyard game with some friends as a 7 year old.

But that is what made those memories, however faultily ingrained they were, to endure. Corrections are made over the course of time as actual videos are seen but the roots are far too deep and far too strong for the old memories to be entirely replaced.

For Cricket fans, it was like being born again when YouTube came online. It had quickly become the repository of old, grainy videos and brand spanking new clips of terrific landmarks, superlative display of athletic abilities, collections for particular player, highlight reels etc.

However, this always-available-at-your-fingertips warps the lasting imagery in our minds. More often than not, the YouTube clips are nothing but a series of money shots. A test match innings of 150, superbly built one run upon another, one well judged leave after another is reduced to 2 minutes 30 seconds clip showing the shots to the boundary and of course, the money shot of the batsman raising his arms aloft at reaching triple digits. A spectacular session of bowling, with the bowlers constantly at the batsmen, making their lives miserable and survival next to impossible, is reduced to, as exciting as they may be, some edges and stumps cartwheeling.

The YouTube highlight reel clips do not justice to what had gone in to a studious test innings or a stupendous spell of bowling. Not even close. In his tribute to Rahul Dravid and his patented approach to test match batting, Siddhartha Vaidyanathan wrote:

An innings of yours would be incomplete without the punctuation marks that you masterfully employed along the way: the focussed leaves, the immaculate dead-bats, the softening of the grip, the late strokeplay, the ducking, the weaving, the swaying, the head totally still, your eyes always on the ball, the focus, more focus, still more focus, even more focus. There are a million links that pop up on YouTube when I type ‘Rahul Dravid’. All of them show you batting. None of them contain your essence. There is no Rahul Dravid in there.

One of the finest spells of fast bowling in recent memory was by Dale Steyn in Cape Town, against India. In conditions that supported him, he was making the ball talk. The delivery to dismiss Cheteshwar Pujara was an absolute cracker. Sachin Tendulkar survived that hostile spell pouring in all his nous and knowledge of batsmanship and the situation, and some generous serving of luck to go on and score a century. It was such a thorough examination of his skills and abilities, so much so that it was voted as the best test innings of 2011. 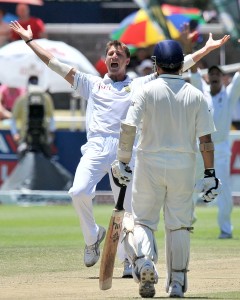 And yet, a generic search of YouTube only produces this and none of them do justice to the exhilarating contest that was on display. It was one those days of Cricket that made you feel alive inside. It is sure to be something that we will, many years from now, regale our grandkids with. But for those that missed the live action, all there is to see are some dismissals, a few play and misses, some boundaries, that is about it.

By ponying up $15 per month for a Willow TV subscription, I now have access to archives to full replay (and not just highlights) for matches as far back as 2010. I can happily watch Steyn and Morne Morkel deliver an hour of terrorizing fast bowling at the Kiwis, on Day 5 of the test at Wellington, again and again. Every. Single. Ball.

For everything else, there are the match reports, fading memories, and of course, the YouTube money shots.