Posted on January 30, 2012 by thecricketcouch

Tucked into the quiet Melbourne suburb of Yallambie is the home of Roger Page, which doubles up as his cricket bookstore. From almanacs to out-of-print books, from must have classics to hot off the press, they are all there.

During my recent trip to Australia, I, along with a couple of my friends, visited The Roger Page Bookstore. When I called ahead to find out whether the “store” would be open, to my surprise, a voice tinged with British accent responded in the affirmative. It was like a house in any other suburb of a large city as we pulled in to the driveway. An elderly gentleman, who could pass for an avuncular headmaster, with his checked sleeved shirt tucked in to his khakis, and his grey hair parted to the side answered the door and greeted us with a firm handshake.

As one steps through the threshold, the size of the store and the sheer volume of books under that one roof slowly comes into comprehension, as one layer is peeled over, another one appears. There is a series of rooms that you can walk through before you get the complete idea of cricket library you are in. 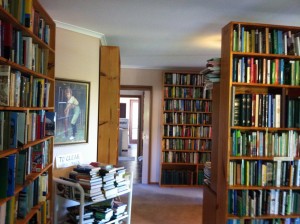 Roger engages in small conversation asking where we were from and about the test match we watched at MCG and concernedly asks about any disappointment we may have had over India’s performance. We assure him that we thoroughly enjoyed the G experience. As with almost any cricket fan in Australia, talk quickly turns to Sachin Tendulkar. Roger said he was going to Adelaide and hoped that he would get to see the 100th there. Oh well!

As we browsed through his immense collection of cricket literature, Roger sets himself down in the recliner, crossing one leg over the other, by the front door. I was overwhelmed – Books, Books, Everywhere – and overjoyed to have had the opportunity to be standing amongst them. 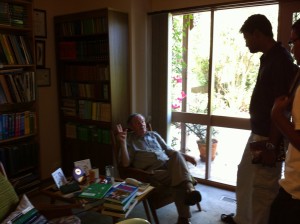 Roger moved to Tasmania at a very young age from England (mystery solved) and got in to cricket book sales in 1969 as a way to increase his own collection. He moved to Victoria in 1972 and set up shop near Melbourne. He became the scorer for the local Fitzroy Cricket Club in the 70’s and continues so, to this day.

Being in a business that brings him in contact with a wide range of characters from across the world, Roger has a lifetime of anecdotes to tell. Oh, Ian Chappell has been here a few times. Last time he was here was to get a book as gift for Shane Warne on his 40th birthday. “I know he’s not going to read it but I should get it for him anyway”.

Mahesh tells Roger about the bookstore he buys cricket books from in Mumbai and Roger chimes in. “Yes, I know him. I actually have been there too. Strange kind of man he was.”

“Yeah, Gideon [Haigh] is a good friend. He visits whenever he can. A very good writer, he is.”

There are a couple of books we want to buy from him specifically but the accent gets in the way. After repeating it a few times, the message gets across and he pushes himself off the recliner and wanders in to the vastness of paper and ink for a minute and returns with what we wanted.

After a small chitchat, we make the payment and decided to leave, reluctantly, promising to stay in touch. It was the best $100 I have spent.

If you are in the Melbourne area and are interested in books on cricket, make sure you stop by the place:

You can also read Siddhartha Vaidyanathan’s account of his visit to the bookstore during the 2007-08 India tour to Australia.

Tweet
This entry was posted in Miscellaneous and tagged Cricket Books, Roger Page. Bookmark the permalink.