Posted on January 29, 2012 by thecricketcouch

It was set up perfectly. Plan was to be done with work at 4 PM Friday EST and welcome the weekend by immersing myself for the next 15 hours in uninterrupted test cricket with three matches happening in New Zealand, Australia and UAE, with the possibility of two of them reaching their conclusion. It so happened that all three ended and it made for great viewing.

First up was the third day’s play in Napier where NZ resumed their 1st innings at 392/5 and continued to pile on the runs after almost all of Day 2 was washed off by rain. BJ Watling got his maiden test century and NZ eventually declared at 495/7. It was Zimbabwe’s turn to bat and a chance to show the world they are making significant progress on their way back in to the international test arena. These two sides played out a humdinger in Bulawayo, not too long ago, and there was a sincere hope from the fans that Zimbabwe would continue to build on that near victory.

The final day of the final test of the India-Australia series was essentially a death watch to see how long before the Indian tail is wrapped up to give Michael Clarke the first series victory at home as Australia’s captain, a very emphatic one at that. As it turned out, it did not take very long. We didn’t even get to the first drinks break. Umesh Yadav brought down the curtains on this miserable series with a lame poke to Brad Haddin off Nathan Lyon. The drama on the last day of the series that was dead so long ago that it was added to the extinct species list, was around whether some/any of the senior citizens of the Indian team would call it a day. Rumors were circulating that at least Rahul Dravid had decided to hang up the boots. As it turned out, this Indian team, which was stuck in neutral through the series, decided to extend the limbo status for a few more weeks, at least. The stand-in captain rubbished the rumors and the fans on Twitter went back to arguing about what went wrong and how to fix it, with no end in sight. 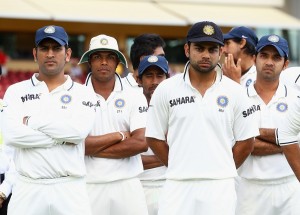 In the meantime, Zimbabwe in reply to the monstrous 497 had spectacularly collapsed to 20/5 by lunch with two of their most accomplished batsmen, Skipper Taylor and Taibu, back in the hut. The Zimbabwe batsmen were out of their depth facing Chris Martin, Doug Bracewell and Trent Boult in conditions that must have been quite alien to them. Soon after in the 2nd session, they folded for additional 31 runs to end on 51 All Out. (A far superior batting unit of the currently top ranked test side in the world would also lose their 10 wickets for 51 runs later on).  Brendan McCullum, standing in for the injured Ross Taylor promptly enforced the follow-on, and it was Groundhog Day for Zimbabwe, on the same day, no less. In no time, they crumbled to 12/5 and if you are keeping count, they had lost 15 wickets for 63 runs. Chakabva was fighting a lonely fruitless battle and it was only of interest to those statistically inclined to see if he could unseat Charles Bannerman in this list. 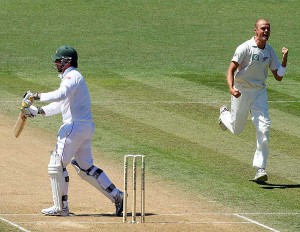 Two matches. Two busts. There weren’t any retirement announcements either. India lost by 298 runs and Zimbabwe by an innings and 301 runs. All in all, a very low-key unspectacular first half to the bender, but the action that unfolded in the second half of the test cricket overdose, more than made up for the putridity that came to pass in the first half.

Beginning the day with a slender lead of 55 but with 6 wickets in hand, Pakistan, I’m sure harbored hopes of increasing the lead past 150 and having a go at England under conditions tailor-made for their spin attack. England would have in fact begun with visions of their first test series win in Asia in a decade. Of course, they had to win this test first and then win on their return trip to Dubai. Prospect, mouthwatering.

Azhar Ali and Asad Shafiq, picked up where they left off on Day 3, following the TeamMisbah ethos of discipline, devoid of flair, attritional cricket. I became a full time convert of the TeamMisbah philosophy some time last year. It doesn’t make for pretty cricket but it is highly efficient. It may not pan out in conditions different from the ones that Pakistan have played, in the UAE, but that can be said of most, if not all of the international teams.

Monty Panesar was bowling beautifully, at pace, turning the ball sharply away from the right handers from a good length, and the edge to first slip, from Asad Shafiq, duly arrived. The new ball sent back the second of the set overnight batsmen, with the lead only at 100 runs. With the tail putting up a much improved performance than their collapse for zero runs in the first dig, England were set to get 145 runs to even the series. Panesar easily outbowled the established spinner in his team, with a 6-162, but that could be due to the number of right handers in the Pakistani line up.

England, if they have shown us anything since the Two Andy show began in 2009 after that 51 All Out performance in Jamaica in 2009 (There’s that number 51 again), is that they have strong belief in their processes and aren’t going to change it for anyone. So it wasn’t surprising to see Strauss and Cook play the waiting game rather than be aggressive and try to knock off some quick runs, while trying to chase down a modest 145. This played right in to the hands of TeamMisbah – choking off the runs and let his three spinners run riot, which they did. From 21 for no loss, to 72 All Out. 10 wickets lost for, you guessed it, 51 runs. Once the floodgates were open, Pakistan weren’t going to be denied. In one of the Couch Talk podcasts, Jarrod Kimber mentioned why he loves watching Pakistan. To paraphrase him “When things are clicking for them, there is a buzz on the field that is unlike any other team”. Ahmer Naqvi has tried to explain this buzz that builds up to a crescendo of inevitability. 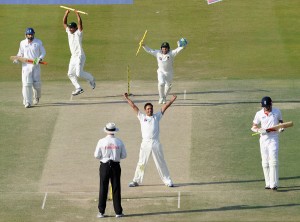 A team that has been number one in the rankings for 5 months loses its first test series after being crowned that and may lose the title if things don’t break their way. A team ravaged by fixing scandals, inept governance, and in-fighting resurrects its cricketing future. A team coming back in to the test arena makes a significant slide backwards. A team of ageing stars is walloped and seems to have no answers but “come to our place and we will see”. A team on the rebound under new management seems to have pieces in place to try and scale the mountaintop again. Amidst all this, New Zealand fits in somewhere.

It was 7 AM and I needed to go to bed. The euphoria doesn’t make it easy.

Just another day in the life and times of Test Cricket.