Posted on January 1, 2012 by thecricketcouch

“If you can kick it or hit it, put it in the MCG, Melbourne will turn up to watch it” said the proud Melbourne native and MCG Tour guide Barrie Johns, while standing on the balcony at the Members Reserve, looking out to the beautiful skyline of Melbourne with Rod Laver Arena, HiSense Arena and Etihad Stadium in the foreground. A couple of days after the first test between India and Australia ended prematurely, we decided to go on the MCG tour to walk around the stadium, soak the stadium in from spectacular vantage points and finish off with the National Sports Museum.

The tour itself takes only about 75 minutes and costs a worthy $30 and you can spend many hours in the museum (even just the Cricket section) that includes a 3-D hologram Shane Warne – a Victorian – talking to you, taking you through his career. There are game worn jumpers and headbands from legends of the game and bats signed by touring teams from days of yore. There is even a cricket ball used in the first test match in 1887. Plenty of baggy greens of Aussie legends encased in a gallery while the baggy green worn by the one and only Sir Don given its own enclosure, taking its rightful place amidst all the legends. 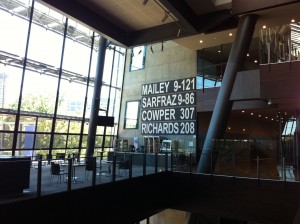 Usually, the guided tour of MCG includes a stop over at the dressing rooms but there was a match going on this day (Melbourne Cricket Club (MCC) vs. Cricket Club of India (CCI)) and so we weren’t given access to the changing rooms. I stopped to watch the team from CCI warm up and take some high catches – not the best club side I have ever seen, let’s just say. I was overcome with jealousy that some no name players with limited cricket skills get to play on a surface, where only 2 days ago, some of the very best cricketers to have ever played the game battled. As I was getting over my envy of the players, we spotted none other than Adam Dale walking up the steps to make his way in to the dressing room. He apparently was playing for the MCC team. Yes. That Adam Dale who took Sachin Tendulkar’s wicket on his test debut in Bangalore. 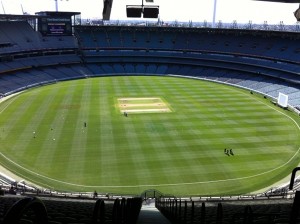 View from Top Row of Seats

The group I was part of included people that were more interested in Football (Aussie Rules) than Cricket, as MCG is home to both sports depending on the time of the year. As we made our way around the ground, Barrie wanted to point out a photograph that has been photographed a lot, of “The Two Greatest Batsmen. Ever”, in Barrie’s view. For the ones in the group that knew anything about Cricket, we realized even before he could say who they were. All of us added to the number of times the photograph has been photographed. 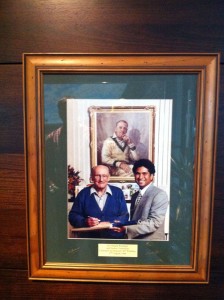 We got the opportunity to climb up to the topmost row of seats in the MCG and also walk down the path the batsmen take from the dressing room to the center. It was an exhilarating feeling knowing that a certain someone had taken the same path only a few days ago. Standing on ground level, looking around the G 360 degrees, trying to imagine a crowd of 90,000 expectantly watching your every move – some more benignly than others – was daunting and unnerving.

My friend Shoaib Naveed, who is covering this test series for PakPassion mentioned that Richie Benuad gets his own table in the media center where he has his lunch and checks on his computer. As we made our way to the Ron Casey Media Centre, we were pointed to Richie’s corner and also a look in to the various Radio and Television broadcast booths. 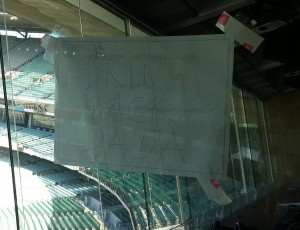 As the tour wound down and we made our way back to the starting point, one could not help but wonder why such endeavors that enrich a fan’s experience of the sport are not encouraged in India. There is no single reason I could think of why the BCCI and/or the state cricket associations would not promote the rich heritage of cricket in India and the lives and times of Indian cricketers and yet, they don’t. There is a Facebook page demanding one. A cursory Internet search for “cricket museum in India” throws up some information on the Bengal cricket museum, a proposed cricket museum for Tendulkar in Pune and about BCCI’s vision statement of having a museum. As mentioned by Mahesh Sethuraman on “Couch Talk”, fans in India do get a raw deal.
Tweet
This entry was posted in Miscellaneous and tagged MCG, Melbourne Cricket Ground. Bookmark the permalink.