Posted on December 8, 2011 by thecricketcouch 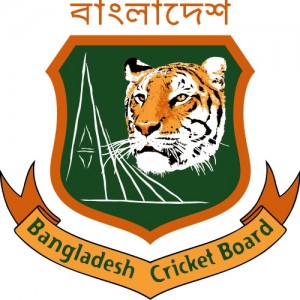 That is the extent of Bangladesh’s futility in the international test arena since their introduction as full ICC member in 2000. With a deft masterstroke that even Machiavelli will be proud of, Jagmohan Dalmiya during his tenure as the President of ICC, awarded Test Status to Bangladesh (who obtained ODI status in 1986) thereby making them a full member of ICC which gave them more importantly an equal seat at the ICC table. What exactly have Bangladesh accomplished that they should continue to enjoy the benefits of full ICC membership?

A young side that is fresh on the scene, that isn’t the most gifted in terms of talent and skills, was going to struggle in the international test arena. It wasn’t just Bangladesh; India took about 20 years before they registered their first test win but thanks to the Future Tours Program (FTP), Bangladesh have played remarkably 71 tests in just 11 short years while India played only 25 tests in their first 20 years as a test playing nation. The following table provides the results tally for Bangladesh’s sub-continental brethren in their first 71 tests as well as Zimbabwe and New Zealand.

The most striking aspects of the above table is that Bangladesh’s Win-Loss ratio is just 0.04 and they have managed to draw less than 10% of their 71 matches. Two of their three test wins came against a depleted West Indies side in 2009 and the other against Zimbabwe in 2005. The other test sides even during their teething years when they were learning to master test match cricket have shown a remarkable ability to draw games. Even Zimbabwe drew nearly 34% of their first 71 matches, which was achieved based on the exploits of some accomplished batsmen. New Zealand, who rival Bangladesh in futility in their initial 71 tests, at least drew nearly 50% of their matches. Another telling stat from the table is Bangladesh’s batting average (less than 22 runs per wicket) in an era of enhanced scoring and standardized pitches.

The picture is better (slightly) in the ODIs with Bangladesh winning 37% of their 258 matches. There is however still a caveat; 30 of Bangladesh’s 70 ODI wins have come against Zimbabwe and only 18 against other test nations in the period from 1986 to 2011. Bangladesh have made some giant killings especially in ICC World Cup tournaments that gave hope to their fans and cricket followers all over, that they may have turned the corner only to see them slide right back.

Once again, the batting average (per wicket) of Bangladesh in their 25 years as an ODI team is the lowest amongst the sub-continental teams and they are more than 5 runs less than the proficiency of new comers Ireland. Remarkably, Ireland fares a lot better in the W/L ratio than Bangladesh (0.94 to 0.37). Another interesting factoid to note is that the other sub-continental teams had won a World Cup by the time they played their 258th ODI match and the best finish for Bangladesh was reaching the super eight stage during the 2007 World Cup in the West Indies.

The Players and Future of Bangladesh Cricket

In the 25 years of playing ODIs and 11 years as a test-playing nation, the number of players that have debuted for Bangladesh in the two formats is, 62 and 101, respectively. The following table provides the corresponding numbers for the cricketing history of the sub-continental nations and Zimbabwe.

This influx of players representing Bangladesh has ensured that there isn’t a viable veteran leadership in the team that can guide the youngsters, which is quite the norm in others teams. There are 18 players centrally contracted by the Bangladesh Cricket Board (BCB) and their average age is just a little more than 24 years with Abdur Razzak being the oldest at 29 and Rubel Hossain the youngest at 21. These 18 players, on average, have limited first class experience of 50 matches, 16 tests and 70 ODIs. The hope is that the core of the future Bangladesh team would be from these players and would take their team to the doorsteps of glory as they mature and learn to win together.

After a disastrous 2011 World cup, the captaincy responsibility has been handed over to the young Wicket Keeper Mushfiqur Rahim. Shakib Al Hasan is rated as one of the top allrounders in the game. In Tamim Iqbal, Bangladesh have an explosive batsman. It is safe to assume that these three players will form the bulwark of Bangladesh’s future as a cricketing nation, but how well have they progressed so far in their test career? The graph below shows the cumulative batting average of Iqbal, Hasan and Rahim so far in their career. Tamim Iqbal promised so much more when he scored back-to-back hundreds in 2010 playing against England. He is still Bangladesh’s best batsman in tests yet he only averages 40. Shakib Al Hasan has a middling average of 30 and the new captain Rahim fares even worse, after 26 tests (28.38).

The temperamental talent, Mohammad Ashraful, was given a long run but despite having the tools to be a very good batsman, he never really did justice to his talents or the opportunities, averaging a measly 23 in 56 tests! That’s just criminal. Rightly, the BCB selectors had showed Ashraful the door but now, he has been called back to the test squad to play in the upcoming series against Pakistan. The table given below paints a sorry picture as to the proficiency of Bangladesh’s batting future. 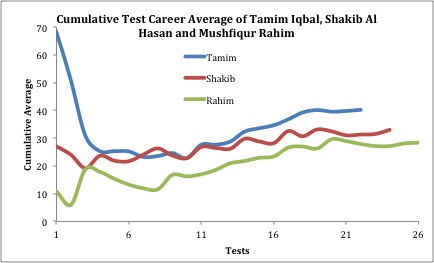 As mentioned earlier, the lack of test quality batsmen in their ranks has severely hampered Bangladesh’s ability to compete and when possible, draw matches. In their home conditions, they are still a decent bowling unit that can provide the team a sniff of victory (as they did against Australia and India) but the batting line-up that is severely lacking in temperament and experience puts paid to those glimmering hopes.

An important aspect to consider here is that India, Pakistan etc got their feet wet at the test level when there were other nations that were of comparable experience and talent level while Bangladesh only has the revamped Zimbabwe for company. This perhaps provides some more merit to the voices that have asked for Bangladesh and Zimbabwe to be demoted to a level below Test status so that they can play four or five day matches against opponents of their caliber and develop winning habits instead of getting bashed in by established test nations.

I do not subscribe to the notion that test cricket should be an elitist sport. As it is, we have only 10 nations playing it. However, there is scope for the institution of a two-tier test system with relegation and promotion, allowing for movement of teams between the two tiers. I do realize this is only a pipe dream, as the politicking in ICC boardroom would never allow such a thing to happen!

Tweet
This entry was posted in Miscellaneous and tagged Bangladesh. Bookmark the permalink.