Posted on September 14, 2011 by thecricketcouch

It was a quick walk from the railway station, across the bridge over River Trent, when I got the full view of the floodlights that gave it away. I was near one of the most picturesque and uniquely shaped ground to watch cricket in. A bloke wearing the England shirt, from the nearby town of Mansfield, gave me company on the 20-minute trot talking about his annual adventure of watching test cricket at the Nottingham Cricket Ground.

It was Day Two of the second test. I had done a stint of commentary on the Test Match Sofa the previous day in South East London. Bullish about India’s chances after having bundled out England for 221, I took a train out of London at 5.30 AM without a ticket to the day’s play but confident I would find one. Two English fans had an extra ticket, as their mate did not turn up. As it would turn out, I’d be seated bang in the middle of England fans in the upper level of the Radcliffe Road End Stand.

By virtue of being so early for the 11 AM start, I decided to take advantage of it by walking around the empty stadium, talking to locals and stewards and observe the teams go through their training sessions. I have been to Lord’s when it was empty and stood on the outfield and also been there when it was rocking with 30,000 raucous fans. Just for the quaintness, the seemingly just-an-arms-length-away accessibility, the backdrop and the picturesque settings, I’d prefer to watch a day of cricket at Trent Bridge than at the Home of Cricket.

There is a certain amount of laid back attitude to this ground. Set in the East Midlands near the Sherwood Forest, it reflects the anachronism of test cricket in the hustle and bustle of modern world, where razzmatazz and instant gratification are the norm. There was no hullabaloo or Woo hoos when the English players pulled in to their parking spaces and made the brisk walk in. A quick nod of the head, that was all.

I made my way to the boundary hoardings and got as close to the nets sessions as possible without actually getting on the ground, with “Trevor the Steward” for company. He was a local and we began talking about the conditions overhead and his past watching experiences. He echoed my initial impressions about the ground. “You know what mate, these days you have cricket grounds built all around like that one in Hampshire… They all look the same. You know what you want in a cricket ground? Character. This ground has that. It has its unique quirkiness in its shape, the pavilion, the old dressing rooms, the floodlights and the view of the town from the stands”. Character. That’s the word I was looking for to describe this cricket ground. It was obvious that it had gone through some rehabilitation and facelift, but it seems to have retained its character. Trevor added, with a smile and hope in his eyes, “Now, if only Sachin Tendulkar can go on to get his 100th hundred, this ground will be remembered forever in the history of the game. What a player!”

Sitting in a section surrounded by English fans who got progressively jolly as the day’s play wore on, I had the privilege of watching Rahul Dravid put on another master class on how to negotiate tricky conditions that were aiding a good bowing attack. Every move and every shot seemed to display what we have come to expect from Rahul Dravid: “Over my dead body”. Sachin came, Sachin went. So did Raina. Dravid was there. The partnership with Yuvraj put India on course to first innings lead but everyone knew the new ball was going to determine the course of the game. Last over before the new ball was due, a cute paddle sweep got Dravid the century and now I can proudly say, “I was there”. The new ball came, Yuvraj went; the hat trick came, Dravid was still there. When he was finally out caught at third man, the crowd stood as one and cheered him on his way back to the pavilion.

The neat little red brick building adjacent to the ground, Trent Bridge Inn, provided the perfect ambiance to catch up with friends and strangers to rehash the day’s proceedings. A little bit of laughter, a bit of banter, whole lot of beer and a few “Did you see that?” and “What was he thinking?” The Trent Bridge Inn was my sanctuary after every day’s play.

The third day’s play in the company of a friend, who made his trip down from Newcastle, was pretty much a blur as England started piling on the runs. Ian Bell is one English player that I do not mind watching for his attractive stroke play but the match was quickly getting out of India’s hands. The runs were flowing, the crowds were enthused and serenaded each boundary, and I made more than my usual number of trips to the beer stalls. An over before tea, I climbed down from my seats expecting nothing much to happen. I heard a bit of roar, some hub-hub and ran to a vantage point to get the view of the big screen.

Contrary to what many may believe, the fans (both English and Indian) that I had discussions with during the tea break and after the day’s play was over, unanimously agreed that Ian Bell was out and should not have been called back. There was a section of the crowd that booed the Indian team when they made their way in after the break but the majority of the crowd did not. You must also remember, the third session of the day is usually when the crowd is boisterous with two sessions of beers in them. Once the day’s play would have got over, even those fans would have moved on. The spirit of cricket – whatever that is supposed to be – would not have taken a hit.

Another session at The Trent Bridge Inn followed. This time with friends that had come from Mumbai, Toronto, Newcastle, London and Manchester. A couple of them even got to meet the best left arm bowler the world has ever seen earlier in the day. India was only 374 runs behind and there was still hope. When you have Dravid and Laxman in the team, 370-odd runs is nothing but just one partnership, and so, we kept our faith.

When England’s lower order added nearly another 100 runs on the morning of Day Four before they were finally bowled out, the hope of an Indian fightback was still pretty high. India had the players to do it but it would be essential for one of Dravid or Laxman to pitch a tent on this wicket and see India through. While belief took a bit of a hit when Dravid edged one behind at the stroke of lunch, it was still there. “You know, the pitch has eased out, we still have Laxman and Tendulkar, this can be done.”

A huge roar went up. Standing across from the Radcliff End gate, eating a chicken tikka kebab with a couple of friends, my heart started beating a bit faster. Play had started after lunch. My knees were getting a bit weaker. I did not want to hear it. One of the friends called someone to check on what had happened. “Please let it be Abhinav, Please let it be Abhinav”. Nope. VVS Laxman bowled James Anderson (4). I felt something give inside me. It can’t be. It just can’t be. I had to sit down as my heart sank. The two guys around whom the fight back could have been built were back in the hutch with 465 more runs to get. 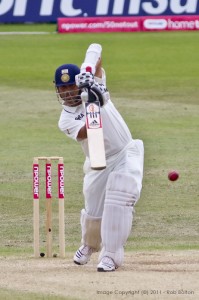 There was still a flicker of the hope candle as I sat back in my seat, two rows behind the Dayanands and between an English friend and Indian (origin) mother who had brought her son to the match for him to see Sachin Tendulkar bat. Although Trevor the Steward did not get his wish, this kid certainly did and Tendulkar put on a clinic in driving the ball straight down the ground. With every confident shot that flowed from Tendulkar’s bat and his high elbow, the little voice that was buried deep inside tried to peek out. “This can be done. Harbhajan has test centuries to his name. He can hang around with Sachin.” When Tendulkar cut Anderson to the point boundary, the hope ship was officially floating but alas, not for long. Praveen Kumar and Harbhajan provided some entertainment but it was all too brief and irrelevant in the end.

Trent Bridge Inn, again, helped us a bit in drowning our sorrows. Though the end result was not to our liking, it was a brilliant atmosphere to watch a test match: pristine grass and brilliant sunshine, boisterous crowds, and strangers who became friends making the memories of a lifetime.