I Spot No HotSpot

Posted on August 21, 2011 by thecricketcouch

Let us consider the two situations. Eoin Morgan thinks he edged the ball from Praveen Kumar during the first innings at Lord’s and walks off even before the umpire had made a decision. Rahul Dravid stood his ground as the umpire shook his head declining England’s appeal for a bat-pad decision. In both circumstances, the video evidence shown on the television for all the viewers to see, with the tools that are considered to be part of the Decision Review System (DRS) – HotSpot and the audio feed from the stumps – do not know show overwhelming evidence of batsmen putting bat to ball.  This is in a series where Stuart Broad checked VVS Laxman’s bat for the non-existent Vaseline. 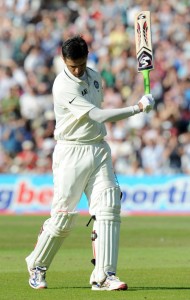 Before you go any further and think I am a technophobe and have an anti-DRS stance, let me assure you, I am neither. In fact, use of technology is good. I don’t tow the line of Sunil Gavaskar and Ravi Shastri and say that technology needs to be foolproof before it can be used to review an umpire’s decision. As someone that has been trained to work with technology all my life, I do understand technology cannot be foolproof at all times. However, in modern day sports, technology has a role to play. Even though its efficiency may be limited by several issues, – for example, amount of light in the case of HotSpot – its implementation by the third umpire needs to be consistent.

According to the pre-series agreement between the BCCI and ECB, the DRS instituted consisted of the HotSpot and the audio feed from the stump microphone. There is a clear distinction between the DRS and the replays that the on-field umpires call for when they are not sure, such as run-outs, stumpings and bump balls.

Based on the evidence that was shown on television, both Eoin Morgan and Rahul Dravid were not out. In the former’s case, the decision never went to the third umpire as Morgan walked off the field on his own volition and in the latter’s case, the third umpire Steve Davis was called in to review whether the decision taken by on-field umpire Rod Tucker was the correct one.

A few over earlier, when Rod Tucker adjudicated Rahul Dravid to be out (caught at short leg, off bat-pad), Dravid went for a review right away. The replays showed the ball missed the bat by the proverbial mile, but more importantly, HotSpot did not pick any indication of an edge. Thus, within the constraints of the mutually agreed upon DRS, the on-field decision was overturned and Dravid was allowed to continue with his marathon effort.

Rahul Dravid, at the close of play, said that he had feathered an edge and so he was rightly given out. Kudos to him for all the after-the-heat-of-battle honesty. Personally, I do not have issues with batsmen standing their ground even if they know they nicked. I consider it professionalism. The batsman’s job is to bat and the umpire’s job is to adjudicate. You live with what the umpires decide, or in this instance, go for the review system if you have any challenges left. However, to the situation in question, it doesn’t really matter one bit what Rahul Dravid thought.

Once he decided to stand his ground, the decision is in the hands of Rod Tucker, who ruled him not out. Once England decided to review it, it becomes Steve Davis’s job to find overwhelming evidence to overturn the on-field call. The subjectivity of umpire Davis has no role to play. His responsibility as the third umpire, once a particular decision has been made by the on-field umpires and has been challenged, is to survey all the evidence that is provided to him within the confines of the decision review system agreed between the two sides, to conclusively determine whether a wrong decision has been made on the field. If so, correct it.

Let us take the case of Suresh Raina’s stumping on Day 3 of the Oval test. It wasn’t the case of an on-field decision being reviewed. The on-field umpire did not know whether the batsman (Raina) was out of his ground when the bails were taken off by Matt Prior. Based on the video evidence provided to him, Steve Davis ruled the batsman out. I can live with that decision., even though, it was a borderline decision and the general opinion may have been that the benefit of the doubt should have been given to the batsman. In this instance, umpire Davis used his subjectivity to adjudicate. He wasn’t overturning an on-field decision.

This is the part of the DRS that really gnaws at me. There is no consistency in its implementation. The system was first introduced as a broadcast tool and has found its way in to a space where it is now part of the decision making process. As Karthikeya Date says here and I here, what is the role of technology and the DRS? Is it to replace the umpires wholesale, or is it there to avoid the “howlers”? That is the fundamental question that needs to be addressed by the keepers of the game (No, Not ECB or CA, as much as they presume it is their divine right but the ICC.).