I frequently go to a local minor league baseball park in the town I live in, and watch games. One of the interesting aspects I have noticed is that fans – adults and kids alike – keep track of the score (runs, hits, how the batter was out etc.) in the score sheet that is provided in the “program” booklet. I have noticed many Dads sitting along with their sons and daughters showing them how to enter the score and still have the time to take in the game and have fun at the park. 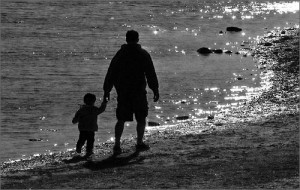 As a child, this probably will leave a lasting impression, I think, about the sport. There possibly is a deeper connection to the sport that is developed over many such scoring sessions, as the child grows up in to a teenager and then an adult. And, this is vital for the sustenance and continued support of the sport.

I made my way from USA to London, U.K. just in time to catch the action on the 4th day of the test at Lord’s between India and England. I plonked down in my seat, had a beer, scanned my surroundings and focussed on the cricket on offer. As I was paying attention to Prior taking apart the Indian bowling attack, I kept hearing this little voice “How many was that? Who hit it?” and an adult responding with the runs and batsman name accordingly.

For the sake of politeness, I did not immediately turn around to find the source of that conversation. But as the little voice started talking about the several players on the field and asking questions – “Looks like Sachin is off the field. What happened?” and “Was that Gambhir that got hurt?”, I turned around and gave a nodding smile, and got started talking to the father and son.

The boy was a blonde haired, blue eyed, with hair peeking out from the sides of his hat 7 year old. His dad told me the first time he ever took his son for cricket, was to watch Brian Lara and added, “He probably doesn’t remember, he was a wee little baby”.

A 7 year old that is noting down in his score book what a particular Mr. Dravid did and a certain Mr. Prior did in the 2000th test. The dad tells me he wanted to have a wagon wheel chart printed out so that his son could mark the areas to which the shots were hit as well. A lot of work for a 7 year old enjoying the sunshine at Lord’s. As soon as I mentioned to them that I was originally from Chennai, the kid piped, “I like the Chennai Super Kings. They have Hussey, Dhoni, and Raina.” He rattled off some of the results from IPL 4 as his dad queried him about the 2011 playoffs. I was thrilled to see this little boy, meticulously keeping track of score in a test match at “The Home of Cricket” while also being equally excited about everyone’s favorite punching bag, The IPL.

I met my childhood friend, who now lives in London, at Lord’s and he had brought along his 4-year old son as well. After getting back home, we were at the dinner table when he asked his son about all the different players he had seen that day. “Dravid uncle was standing. Broad uncle hit some shots and ran” and so on.

Before I embarked on my trip to Lord’s, I stopped over in New York to meet Homer and SidVee. While discussing the developments of Day 3 at Lord’s over a few beers, the talk eventually turned towards general state of cricket. Homer categorically declared, “I don’t see test cricket surviving for more than 20 years from now.” Homer has never been one to hold back his opinions but his opinions are usually well placed and thought out. His reasons for the imminent demise of test cricket, which also led him quitting writing his blog, can be found here.

Test cricket has survived through far worse things: World wars, Body line, Match fixing, Scandals, Vikram Rathore. Incompetent administrators who might only be interested in the money, I don’t think, can hit the final nail in the cricket coffin. The demise of test cricket has been proclaimed throughout its long and glorious history many times, and yet, it continues to chug along. The health of the game is in our hands – the fans. If we nurture the sport that we love so dearly by passing it on to the future generations, the game can certainly blossom and more than just survive.